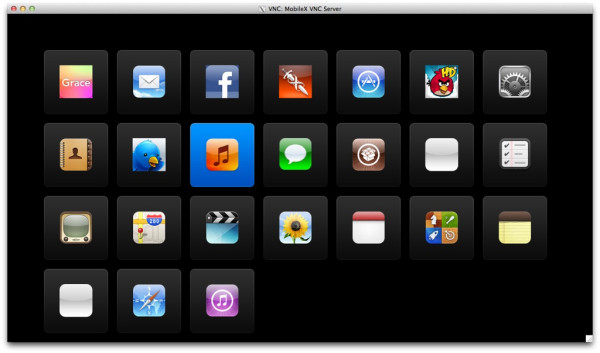 iOS Hackers Steve Troughton-Smith and @TheMudKip have been working hard to bring some iOS magic to Apple TV, specifically in bringing iOS Apps to your large screen without the sanctioned support of Apple.  So far their progress is very promising, they have managed not only to install iOS Apps on the Apple TV, but also get apps to appear full screen. In the video below, the hack by @TheMudKip showed iOS Apps like Facebook, YouTube & Maps running in 720p fullscreen.

All this is made possible by MobileX, it’s just like a SpringBoard on the iPhone but this one is coded just for Apple TV. It will be from here where you would be able to launch iOS Apps.

@TheMudKip said that he “rewrote SpringBoard from scratch using only QuartzCore.”

Next comes the question of controlling your iOS Apps on the Apple TV. As we all know, iOS is a touch based OS and not a hardware controlled one. In its early stages the hackers used VNC to control the apps, but Steve confirmed that he had cooked up a hack to control the apps via Apple TV’s IR remote control.

“The built-in menu controlled by the remote allows you to quit apps, launch Safari, connect to Wi-Fi, or show multiple apps side by side,” he said. “Audio and video work well too so many games and media apps just work, like YouTube.”

While rumors are around about a secret Apple TV perhaps emerging officially from Apple, we are not sure if and when Apple may reveal their own television, regardless, with this hack it looks like we might be able to taste a bit of iTV a little sooner once MobileX is ready for primetime.

Will this make you get an Apple TV?