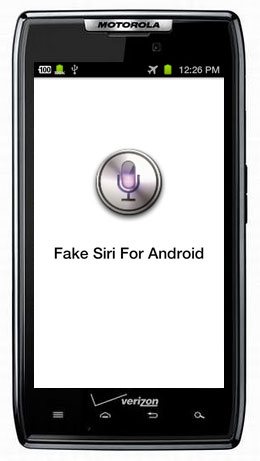 One of the biggest problems with Google’s Android Market is its extremely permissive nature of an apps being approved within it.  Tons of fake apps are uploaded to it on a daily basis, and are usually only pulled when apps are found to be malicious or infringing on copyrights but it usually takes awhile to happen. One of the latest apps to join this “fake app” bandwagon comes from a developer called “Official App” which is no doubt designed to fool inexperienced Android users. This  so-called “developer” has recently put up an app called “Siri on the Android Market, fooling people into thinking it’s the real thing.

In this case, Google has banned the Siri knockoff app that was making its rounds on the Android Market, which is good for them considering the app called “Siri for Android” is nowhere near the proficiency of the actual Siri’s performance on the iPhone 4S. In fact, Google’s banhammer has also fallen upon the developer, which means you won’t hear from the developer on the Android Market any more from now onwards.

While there are numerous Siri clones already available on the Market, this “Siri” app didn’t even try. When you download the app, all you’re getting is a shortcut to launch Google Voice Actions – a feature that’s already available on most Android devices and can be launched by holding down the search key. Then, it’s very problematic to claim that Google Voice capabilities can even touch the level of speech recognition qualities of Apple’s Siri on iPhone 4S. However when these other “Siri clones” are not positioned as such, that is, without a claim that they are “Siri for Android, and use native Android STT technology (Speech-To-Text), they are perfectly legit, if limited. Samples of these are Vlingo Voice-To-Text app and Iris app that can talk back to you.

My take on this is that along with introducing stricter rules for admission of apps to Android Market, Google might want to dedicate an extra effort to developing a Siri-like functionality of its own.