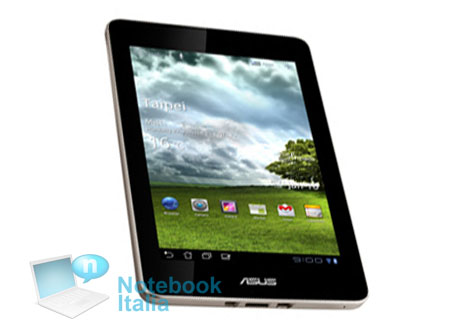 According to NotebookItalia, who got this leaked rendering, ASUS will officially announce a 7-inch version of its successful Asus Eee Pad Transformer Prime. The rendering makes it look like it’s running Android Honeycomb, and at launch time it’s quite possible, as no recent ASUS Android devices were launched with Ice Cream Sandwich just yet. Apparently it will sport the same mighty Tegra 3 processor as its bigger brother. However, here’s where this rumor gets quite unclear: a 7-inch tablet from ASUS was demoed at CES 2011 where it was called ‘ASUS Eee Memo Pad’ and was said to be based on a dual-core Qualcomm Snapdragon 1.2 GHz processor.  Some models of that Memo (or was it ‘MeMO’?) might even be set with glasses-free 3D screens, but it didn’t happen just yet.

Whatever the discrepancies between the two proposed pocketable  ASUS tablet prototypes, the same press photo leak source has its price point pinned at $299. Will it be based on Tegra 3, or Snapdragon S3, or even S4, will be established at CES 2012.