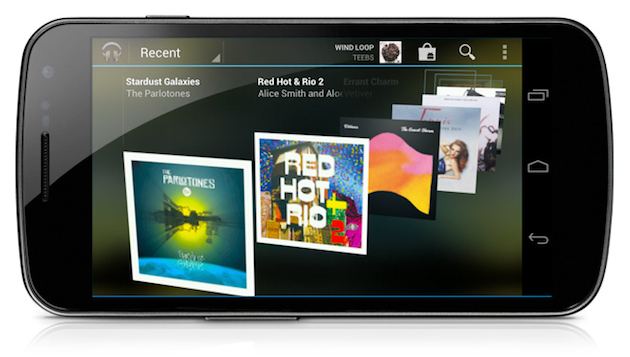 First it was Trebuchet, a CyanogenMod 9 launcher, now this.

Developer Andrew Neal broke down the details of a versatile music player that is meant to replace the stock Android 4.0.3 app, and these include many exciting customizations: users will be able to set custom shake actions (i.e. for next song or play/pause) that can work throughout the OS or when the screen is off, there will be custom notification area controls that can have as many or as few controls as you’d like, then there is an ability to search Android Market, set ringtones, and use swipe-gestures throughout the app. Neal is also planning on adding a full theme engine for others to customize the look and feel of the app, remember Winamp?

It’s not available for downloading just yet, but will eventually get baked into the full Cyanogenmod 9 ROM. Andrew Neal is also planning on releasing a version of the app into the Android Marketplace at some point, so non-hackers should get a chance to improve their music experience as well.

CyanogenMod 9 is available for maybe half dozen devices right now, and these ROMs are still mostly in their beta custom form, but there’s no doubt that soon there will be much more phones and tablets running these optimized, streamlined and very functional ROMs based on Android Open Source Project’s  Android 4.0.3 source code. Very early appearance of custom launcher (Trebuchet) and this replacement for stock Android 4.0 music player is a sure sign for this.