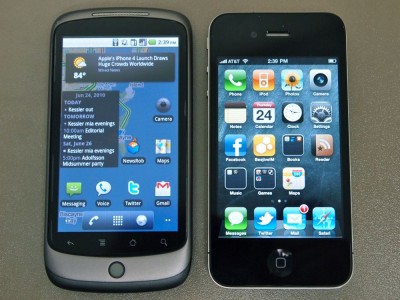 A brand new study from Xyologic has arrived announcing the headline, “iPhone is for games, Android is for apps”. If anything is going to start a bit of a flame war, this would certainly be it.

And start a war it has. The Unofficial Apple Weblog responded to the article stating that it was in fact skewed unfavorably against the iPhone/iPad.

Tuaw had this to say:

Xyologic compares the entire US Android Market against just the free iPhone offeringsin the App Store, which is the first warning that its data and analysis is going to be skewed. Comparing the top 150 downloads between these weirdly disparate markets yields the following results:

If you didn’t know any better, you could easily look at the numbers Xyologic came up with and reach the same conclusion they do: Android users certainly appear to be downloading more apps than games compared to iPhone users. But the fact that Xyologic only chose to analyze the numbers for free iPhone apps skews the numbers so far that the study is essentially meaningless.

Of course Xyologic also chimed in a response, apologizing for not clarifying that the Top 150 Android apps are all free, so therefore they were actually comparing free iOS apps to free Android apps.

Regardless, only analyzing free apps versus free really can’t give us a clear picture over which platform is more ‘business oriented’ and which isn’t. A wider comparison against ALL Android/iOS apps might give us a better look at who is downloading more games but honestly even such a comparison means little.

Just because iOS has more games doesn’t mean tons of people don’t play games and use their iPad/iPhone for business. Such a comparison is really just punishing Apple for having better games, while many Android users may not be downloading as many games simply because it doesn’t have as strong of a gaming offering.

As a person that uses Linux, Windows, OSX, Android (tablet/phone), iOS (iPod Touch)… I honestly don’t get why fans on one side or the other make such a big deal about which platform is allegedly better.

Android has its positive features (more open, more freeware oriented) and negative (malware and security issues), while iOS has its positives (better games, better security) and negatives (not as open, not as much freeware). It really boils down to what you are looking for in an OS, not which is better than the other.

Bottom line, there is evidence from this study (even if it is somewhat skewed) and other studies out there that suggest that iOS users might in fact be downloading more games than apps, but again this doesn’t speak for what kind of users are on each platform or which is better, it just likely means Apple has plenty of great games to choose from.

In short: “Can’t we all just get along?”