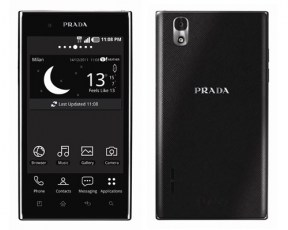 Not too long ago, we announced that the LG Prada 3.0 was in fact in the works. Now it seems that LG’s newest Prada-branded device has finally arrived on scene, at least in Korea.

In the hardware department, it isn’t exactly cutting edge, but it isn’t a weakling either.

The Prada 3.0 features a 4.3-inch WVGA NOVA display, a 1GHz dual-core processor, and an 8MP camera.

Truth be told, the Prada phone isn’t about having the best features and much of the appeal is likely just in the name and design. It is a rather attractive phone, and for those with cash to burn it has a certain appeal to it.

For those of us that are more budget conscience though, we would probably want a bit more power under the hood for such a step up to the $780 price point.

The LG Prada 3.0 features ICS and will hit Europe and the rest of Asia in January, but what about consumers that are looking forward to the phone in US and Canada? For now no such US launch date has been mentioned.

Overall, a pretty pricey phone that is certainly for a very limited niche market, but I have to admit it is a very nice looking device, at that.