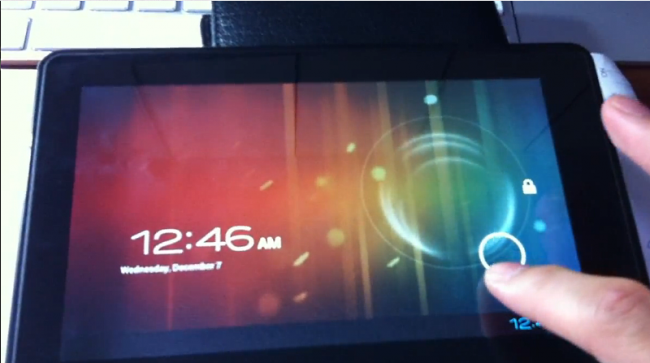 It was an early Ice Cream Sandwich build demoed at Liliputing couple of days ago.

Since then, the development efforts were concentrated on elimination of serious flaws of this ‘pre-alpha’ build of ICS by JackpotClavin:

— SD card was not mounting, and many apps that require presence of it might not work properly, or weren’t install at all;

— video was not working;

— sound was not working, most of the time

Update for JackpotClavin’s pre-alpha ICS build was released by XDA-Developers member bl1nkk that addresses some of these bugs and problems:

It has a menu button in the drawer.
Trebuchet settings → General → Auto-rotate screen
And landscape mode should work.

Rom, including the fixes above: XperiaPlayer packaged all fixes in a flashable zip right here. It’s a complete ROM, not just a patch. If you do a clean flash, use this one!
MD5: 81fb293c32016f8ca3c09df3e9612d8d

Whenever you feel like you’d want to experiment with your Kindle Fire, or just out of curiosity, you can try it:

As of now, the update doesn’t offer all the fixes, plus more bugs and glitches are discovered

Just don’t forget to install TWRP, a customized Kindle Fire recovery utility, before your experiments with this ICS build. BradLinder of Liliputing has also another video that can help you to install the pre-alpha ICS build:

There’s also a detailed instruction published at Liliputing, so the process of transforming Kindle Fire into Ice Cream Sandwich tablet can be accomplished much easier than it may sound out of the explanations here.

The ICS on Kindle Fire project goes in parallel with previous efforts of g1011999 on building ICS.