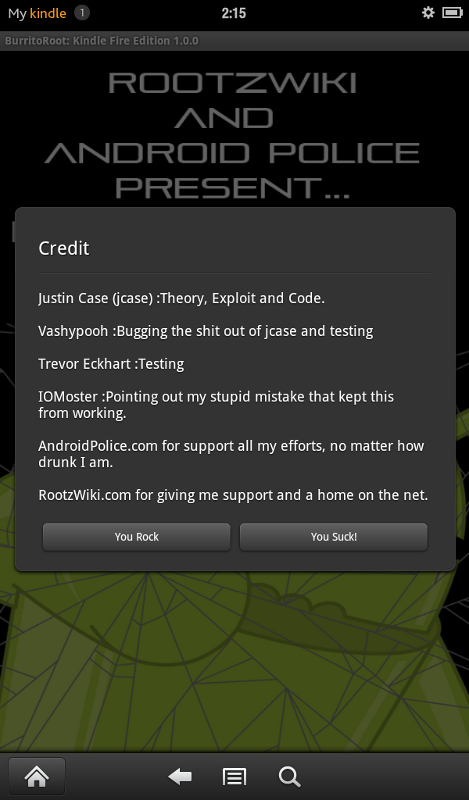 It was expected sooner than later, but now it’s become reality.  By hard work and determination of Android Police’s own in-house hacker named (appropriately) Justin Case and helpers like Vashypooh, Trevor Eckhart, and IOMoster of TeamWin, the rooting of Amazon’s Kindle Fire has become possible once again.  This is after Amazon’s firmware upgrade to version 6.2.1 killed root privileges. In an exclusive post to Android Police, restoring the root on Kindle Fire looks like this:

Sure, it might take an app called SuperOneClick to un-root your Fire first, but according to first happy customers the procedure works fine if the instructions are followed closely and with an understanding of what each command does. So far, users need to know how to use ADB debug mode to clean your Fire from previous rooting attempts, if there were any. Then, the TWRP recovery utility might be much help pre-installed, to be on the safe side when some mistakes, mistypes, or otherwise bungled permissions would result in boot loops, or other sorts of soft-bricking your Kindle Fire.

Good discussions of this procedure helped by Justin Case himself can be found at rootzwiki. The next firmware silent “upgrade” via OTA may break this root again, but for those Fire users who would decide to take path to CyanogenMod 7 and Ice Cream Sandwich from here there will be no more sneaky upgrades from Amazon. The rooting procedure has got the name BurritoRoot, the implications of which we described earlier.