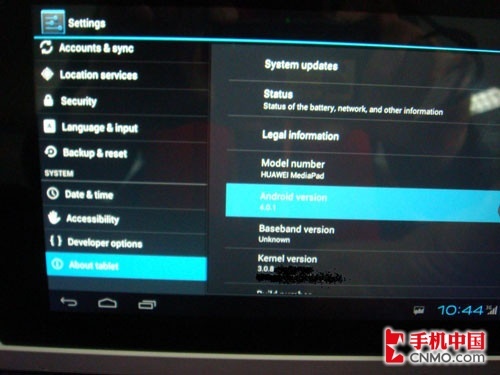 Phandroid has leaked pictures apparently showing that Huawei is working on putting Ice Cream Sandwich on their MediaPad (branded at T-Mobile as Springboard, between $180 and $250 on contract, $450 without). This particular tablet didn’t get much attention mostly because being offered through a carrier with too many “value-added” apps and just being routinely overpriced. Nevertheless, this 7-incher has the best pixel density in its class, at 217 DPI which looks gorgeous on its IPS screen.  It’s a powerhouse based on Qualcomm’s 1.5 GHz Snapdragon S3 dual-core chip that runs Android 3.2 smoothly out of box. There’s no question that putting Android 4.0.3 on the MediaPad (then, obviously the T-Mobile Springboard) will bring an even better user experience. There are also rumors that AT&T might have their own re-brand of the MediaPad. Huawei seems to be dedicated to put ICS on their lineup of devices, as it was noticed with the official beta of ICS on the Huawei Honor. All in all, the MediaPad is a nicely built tablet that works perfectly.

Kind of a pricey toy, but if you happen to live in the UK, the British MediaPad can go at about $40 subsidized by their carrier. However, that was a claim by Huawei, and there’s no supporting statements from carriers just yet. There are also estimates that if Huawei will decide to go ‘unhinged’ on the US market (that is, without carriers’ support), the retail price of this beautiful 7 inch tablet could be as low as $250.