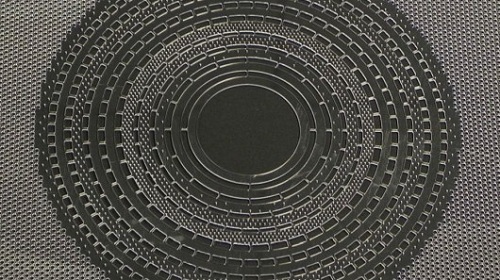 A few years ago invisibility cloaks were just confined to fiction. Now, it is a reality with research going on in a number of countries. But most of the experiments are being done for making something invisible. But the scientists from Germany’s Karlsruhe Institute of Technology decided to do something different, create an invisibility cloak for sound.

As you might know, all the current invisibility cloaks play with light. A light ray from behind an object is curved around it and then it reaches the eyes of the observer. This makes the object invisible as the viewer will only be seeing what’s behind the object.

For developing the “silence cloak” the scientists, obviously, experimented with sound waves. The experiment was done using a 1mm-thick plate which was built by Dr. Nicolas Stenger.

As the plate is made of both soft and hard carbon polymers, each ring within the plate was found to be resonating on a different frequency over a range of 100 Hertz. This resulted in the sound waves traveling around a central circular region within the plate. Sound was not absorbed or deflected.

Prof. Martin Wegener, Stenger’s colleague, has this to say on the experiment: “Contrary to other known noise protection measures, the sound waves are neither absorbed nor reflected. It is as if nothing was there”.

The experiment appears to be a success and we believe the concept might become big in the very near future. And we will be covering it when that happens, so stay tuned to this space.