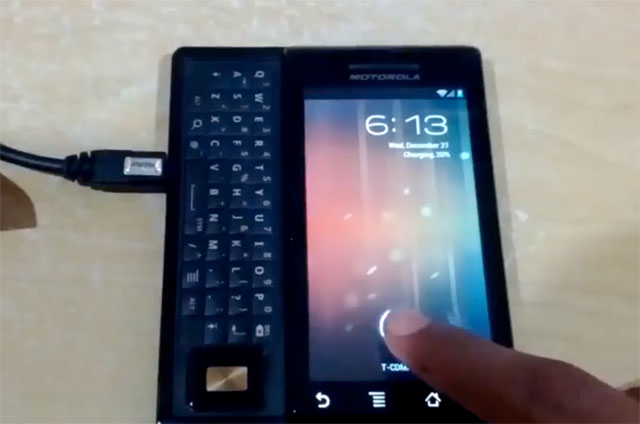 This is a very early custom build of CyanogenMod 9 (Android 4.0.3 out of Android Open Source Project) that didn’t get its own fork at CyanogenMod repositaries just yet. Adventurous users and fans of the original Motorola Droid may get a first glimpse of ICS goodness on their phones by using a download link here. Make sure to follow the discussion at XDA-Developers if you read this news late, as the new builds pop up constantly.

This build (or as author calls it “attempt”) was accomplished by XDA developer kfazz. As the video above shows, it’s quite nice and reasonably smooth for a more than 2 year old phone with just 256 MB of RAM. First test reports show that the build has colors that are fixed from previous kfazz builds, UI is a lot smoother, screenshot works, WiFi works. Interestingly enough, the available memory is about the same as what it was on Gingerbread — 90mb free, and that is without all of the memory booster tweaks, such as Supercharger, etc. Screen rotation is backwards, keyboard out triggers portrait, and the camera gives a “cannot connect error”. The’re’s more quirks and bugs to keep this highly experimental build a daily runner for Droid, but the work goes on for the growing excitement of Droid community.

There’s also a report that the last update of this ICS ROM works on Motorola Milestone A854 model (but not on A853 model). All in all, it’s a Christmas gift for Droid fans that came early.