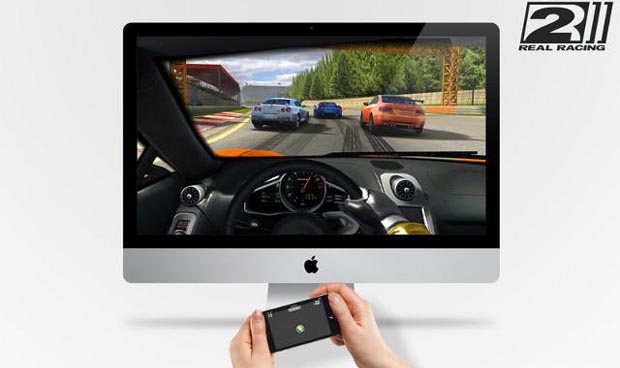 Gaming on the iDevice of your choosing doesn’t necessarily mean that you are restricted to that little screen in front of you. You can go ahead and game on your iMac too, using your iPhone or iPad as the controller in Real Racing 2. The OS X driving game can be played the conventional way, but it can also offer a Wii-like experience thanks to the tilt sensor in your iDevice.

No, you don’t get that white plastic shell of a steering wheel like how you got in Mario Kart Wii, but the fundamental idea is the same. In fact, Real Racing 2 for OS X is pretty much a port of the iOS version, except this way you get a bigger view of the track in front of you without it tilting on every turn. There’s a 16 car grid, 15 tracks, and 30 officially licensed cars. These include the 2010 Nissan GT-R R35, the 2012 McLaren MP4-12C, and the 2010 Ford Shelby Mustang GT500.

Yes, a $600 iPad is probably the most expensive game controller you’ve ever purchased, but Real Racing 2 could point toward more iOS/OSX crossover support from other developers too. Pick it up for $12.99.