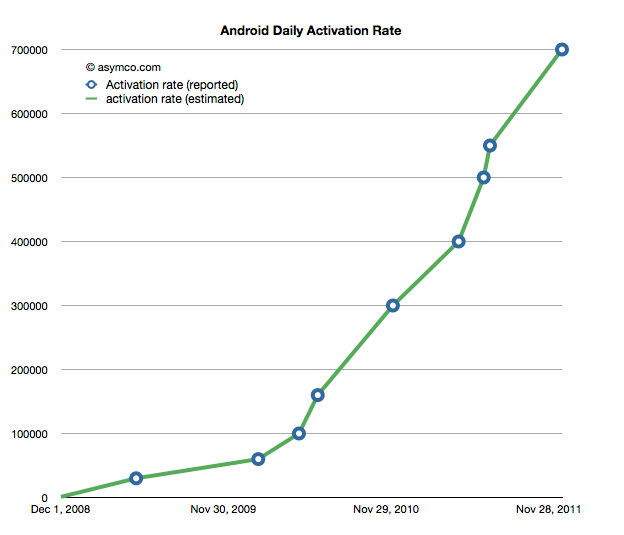 The Apple iPhone 4S found its way to millions of customers within just a few days of its release back in October. But many Apple fans who were waiting for an iPhone 5 were deeply disappointed with the latest iPhone. That might have helped the Android platform to become a bit more popular. According to the latest info, over 700,000 Android devices are being activated every day.

That’s according to Andy Rubin, Google’s Android chief, who announced the numbers via Google+ and Twitter late Tuesday. That means around 5 million new Android activations are made every week.

Rubin also revealed that those 700,000 activations are for new devices only and not for resold ones.

According to Rubin, “”We count each device only once. Activations means you go into a store, buy a device, [and] put it on the network by subscribing to a wireless service“. That might be a reply to a comment about Android by Steve Jobs in September last year: “We think some of our friends are counting upgrades in their numbers“.

Although Rubin did not specifically say anything about counting upgrades, he did say that Google counts each device only once.

Eric Schmidt, Google’s executive chairman, revealed earlier this month that about 550,000 Android phones were being activated per day. But that announcement was specifically about phones. It appears that Rubin is talking about phones as well as tablets as he has mentioned “devices”.

But it is a fact that Android is already the most popular platform in the US. It’s going to be a bit difficult for Apple to hit back as it is just a single company. Android devices are made by many manufacturers from around the world with a good range in pricing for all budgets. Whatever Apple is planning, they better make it big and quick.