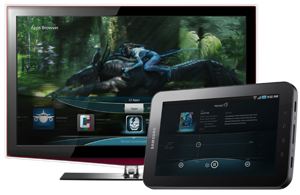 Everything has to be smarter and faster to keep up with the demands of today’s consumers, and the living room environment is no exception. Cable providers are losing out on revenue thanks to “over the top” services like Apple TV and Roku, so how do they capture it back? Myriad Alien Vue has just been announced and it effectively lets you run Android applications on your HDTV of choice, pushed through by your chosen TV service provider.

That’s important for folks like Shaw and Comcast. They can implement Myriad Alien Vue as part of their overall package, offering an integrated and unified user experience. The solution allows for support of a range of HTML5-based Android applications, plus the Google TV standard. In the brief demo video below, we are shown such apps as Twitter, YouTube, Netflix, Dropbox, and Pulse. All of these can be offered through a branded app store.

Yeah, it’s not Android Market, but the point of having that white label app store is so that the TV cable and satellite providers can capitalize on the additional income stream through apps and premium content. There’s also an accompanying app for smartphones and tablets to control the TV.

“Since launching at Mobile World Congress early this year, we have had an incredible response to our Myriad Alien Dalvik software,” said Myriad Group CEO Simon Wilkinson in a company press release. “We have shown how Android apps can work seamlessly across non-Android devices, including mobile phones, tablets and iPads, and now, with Myriad Alien Vue, we have delivered Android to another key screen in people’s lives, the TV.”