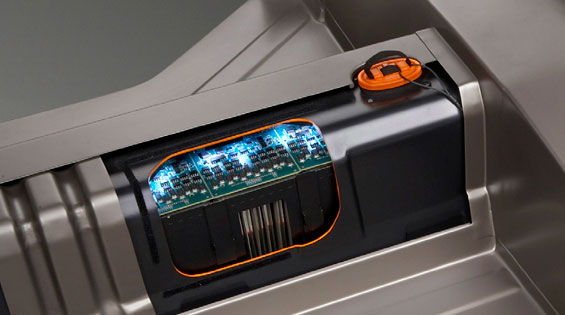 There’s nothing new about using electromagnetic induction for “wireless” charging of many devices and gadgets. Gizmag present a good array of examples like a “cable-free option to keep the batteries of everything from mice and keyboards to mobile phones and toothbrushes juiced up.”

German automakers have obviously decided that the time has come to inductively power bigger gadgets than toothbrushes. It’s the electric vehicle’s turn now. German government-backed “Effizienzhaus-Plus mit Elektromobilität” project, or “Effective House Plus with Electric Mobility” has pilot plans to demo a feasibility and effectiveness of these inductive chargers for a speciment of a German household (and a garage for several electric vehicles):

EV’s in that test will include electric bikes and Smart ForTwo cars, plus several more electric cars from makers such as Audi, BMW, Daimler, Opel and Volkswagen. Daimler will start its entry into such tests in March 2012 by supplying a Mercedes-Benz A-Class E-CELL modified to include an induction charging option to test how effective the technology proves in real-world conditions. Fitted with a special charging coil, the A-Class E-CELL only needs to be positioned over a charging coil in the ground to automatically begin cable-free charging by way of an electromagnetic field.

Of course, a mid-sized or bigger electric car like that Tesla might be better and more “effectively” served by connecting a charging cable directly to it, as opposed to to running inductive coils in the garage floor and walls. We are supposed to run an “Effizienzhaus” effectively, aren’t we? Why waste that precious power on heating up the gap between coils in your garage floor and in car?