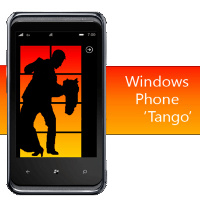 Windows Phone 7 hasn’t quite caught up to iOS or Android, but the Mango update with its 500+ upgrades sure made a significant dent. Now, we’re ready for the next major update to Microsoft’s smartphone platform and it looks like next month’s CES is where they’re going to reveal the Tango update to WP7.

Windows Phone Tango doesn’t sound like it’s going to be nearly as substantial as its tropical fruit-named predecessor, but it will reportedly still bring some new moves to the dance floor. For instance, we’re hearing that it’ll get support for smaller screens, smaller chassis sizes, and even LTE. Considering all the LTE-equipped Droids out there, that’s a good thing for Redmond.

But it takes two to tango! There’s a good chance that Nokia will be showing off its new Nokia 719 and Nokia 900 at CES, both of which could very well ship with Tango right out of the box. The newest WP7 update is rumored to be released “soon” after CES.

Looking a little further down the roadmap to what could be Windows Phone 8, we’re hearing that the “Apollo” update is currently being slated to launch in mid-June 2012. Does this mean you should wait? Or is it likely that existing WP7 and WP7.5 devices will be eligible for the WP8 upgrade?