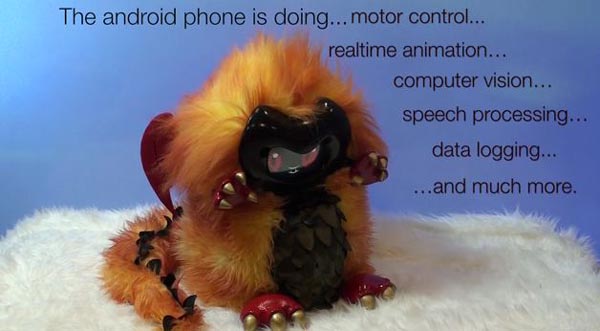 Furby? Tickle Me Elmo? Nintendo 64? These were all great holiday heroes in their day, but what consistutes a great toy has just taken a quantum leap toward the next generation. Enter the DragonBot. More specifically, Kombusto is the first of what will presumably be a series of DragonBots and it could be one of the most powerful kids toys in some time… as well as for the kid in all of us.

Basically, the DragonBot is a robotic stuffed animal with Android as its brain. The smartphone docks into its face and effectively functions as the face, showing various expressions by ways of its virtual eyes and mouth. The Android phone is also what controls its articulated limbs and torso. But that’s just the beginning.

It is very good with language, works with visual cues by way of the front-facing camera, and helps children learn all sorts of things. Kombusto is also connected to the Internet, presumably over WiFi/3G/4G via the smartphone inside. Communicating with the cloud, it can gain the collective experiences of all other DragonBots, allowing them all to learn what each individual bot has learned. And you can remotely control Kombusto by way of an app on your Android tablet.

The DragonBot was developed by researchers from Harvard, Northeastern, and MIT, so you know it’s kind of a big deal. They’re also saying it’ll cost less than $1,000, though it’s not clear whether or not that includes the smartphone brain.