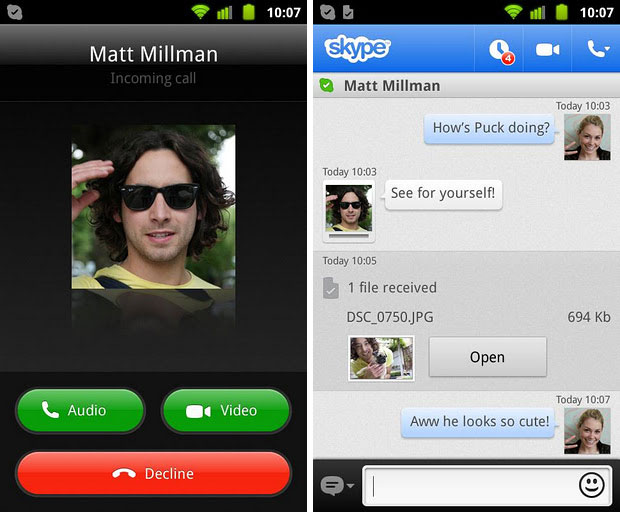 This new version of Skype for Android offers features significant enough to bring it numbering to 2.6.x field from the previous 2.5 versions. The usual roster of features are retained:

— Low cost calls and SMSes to mobile phones or landline phones from the Skype on the Android device;

— Sending pictures, videos, and files to any of the Skype contacts;

Below are the features that are either improved, or new, as per Skype’s announcement:

— Easier signing out, and also auto-signing in;

— Improved look (of an app though, and not you, or your correspondent!);

It is also said that sending videos and photos aren’t the only improvements with Skype 2.6 for Android, as battery life is improved with this version especially for devices running on NVIDIA’s Tegra 2 chipset – where these will include the Samsung Galaxy Tab 10.1, Motorola XOOM and Acer Iconia Tablet among others. Not only that, a bunch of other devices that now support video include the HTC Amaze 4G, Motorola DROID 4 and Motorola DROID RAZR, just to keep up with the times. Basically, as long as your device has Android 2.2 Froyo or better, you can always try to give Skype video calling a go.

The upgrade is very fresh on Android Market, but the first response is quite enthusiastic: users note better video call support, auto-login features that save on entering password every time Skype app is started, and some more.