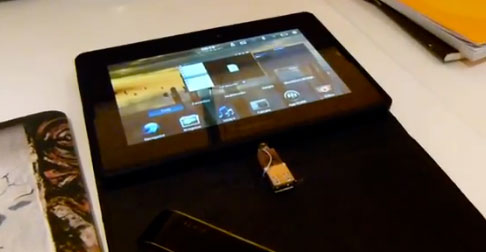 Following the succesful penetration of Dingleberry Team into bastions of Blackberry Playbooks, the Spanish blog eltecnoblog.com has posted a demo of the exploit for turning on the HOST mode in Blackberry Playbook’s USB port; commonly known as USB On-The-Go (OTG) connection to a host computer for sideloading and other simple tasks.

The instructions for anyone willing to repeat the feat on their Playbooks are promised for the later date. But in any case, the exploit is very important. Blackberry Playbok has no external SD slot, so basically if you have purchased a 16 GB unit at some store where “fire” sales of these are going for $199, then that’s it, 16GB of storage is all you’ve got.

Sure, you can do some sideloading and replacing your old HD flicks with new ones using an original, stock OTG connection to your computer, but it’s a hassle. Using a USB flash stick is much more convenient. When powered from its AC adapter, the Blackberry Playbook might even connect to 2.5″ hard drives in mobile powered enclosures.

Putting peripheral connectivity aside, this development is very significant for all those tinkerers who dream to put Ice Cream Sandwich on this cheap, but very powerful and versatile device. Sure, initial probes and rooting has been accomplished without the USB HOST feature activated and they might continue without it. The ease of use of just a flash stick makes this tinkering much more attractive.

It’s unclear at the moment whether or not the unveiling of a USB HOST mode will survive a security update roll-out, or OS upgrade to 2.0, but the accomplishment is great.