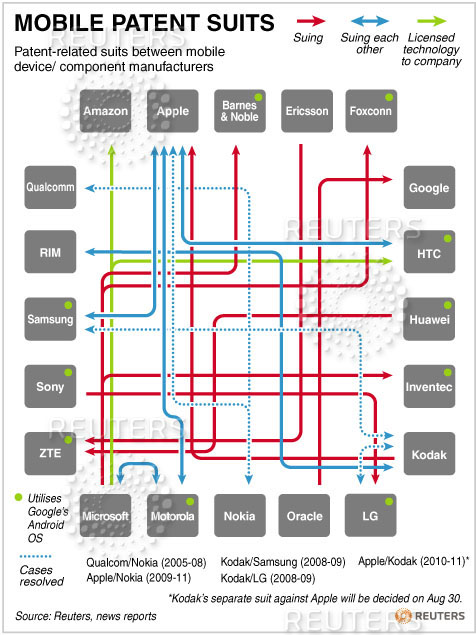 Call it bad week for Apple’s legal teams worldwide. First, A German court has issued a ruling in a patent case between Motorola and Apple which could lead to a temporary ban on sales of iPhones and iPads in Germany. Temporary ban means just that, and while the court ruling could lead to a preliminary injunction against Apple, the possible final outcome is still not that clear: there might be more rounds in this fight.

Basically Motorola would have to put up a €100 million bond for the injunction to take effect… and if the ruling is later overturned on appeal, Motorola could lose that money. According to Thompson Reuters, the current front lines and dispositions of legal warriors on that bloody battlefield look like this:

The blue and red strike lines above depict here huge money streams. Sure, the direction of arrows on these can be reverted any minute, and the only undisputed winners are patent law courts and lawyers. Customers, on average, are on a losing side as Apple plans to go after basically any non-Apple tablet for supposed infringements.

However, there are some local successes at some fronts, like Australia where after a long and grueling battle in which Apple attempted to ban the Samsung Galaxy 10.1, Samsung is winning for now. The High Court of Australia has ruled that Apple’s case lacks merit, meaning Samsung is now in the clear to sell the tablet as it sees fit.

Samsung has confirmed the Galaxy Tab 10.1 will go on sale in time for the holidays in Australia now that things have been straightened out legally. That is definitely not to say that Apple has unconditionally surrendered and capitulated out there, it’s just a reversal of this decision may cost way too much.