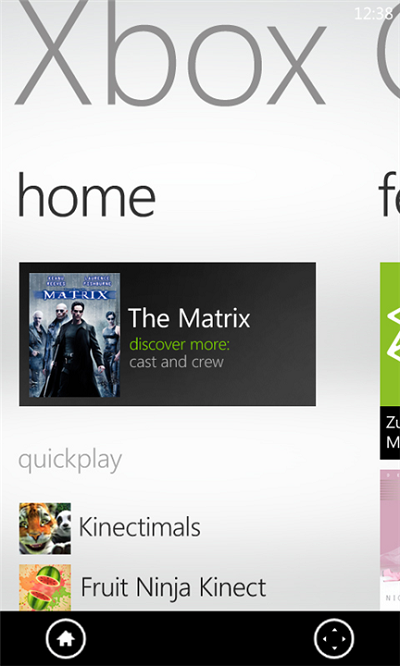 Microsoft’s dashboard update to their Xbox 360 was gladly welcomed by all the owners of the console earlier. Now, as expected, the company has released the Xbox Companion app for Windows Phone devices.

The Xbox Companion app will be working as an extension of the Xbox 360 and will allow you to log into your Xbox Live account. The Xbox Companion search, which is powered by Bing, will let you search for content from popular entertainment services on Xbox LIVE.

You can search for movies, TV shows, music, games, and other information using your Windows Phone. You can keep an eye on the activities of your friends with the app, and take a peek at second screen info while you are using your console.

The app also converts your Windows smartphone into a remote control allowing you to play, pause, rewind, and fast-forward content playing on your console.

Meanwhile, iOS users also have something to cheer about. An iOS app, dubbed My Xbox Live, is now available and it has been optimized for both iPhone and iPad.

The new iOS app, coming with fewer features than its Windows Phone counterpart, allows you to use your Xbox Live account and will be familiar for those who have used the Windows Phone Xbox Live app.

With the iOS app, you can read and send messages, edit your profile, manage your friends list, and keep an eye on what your friends are up to. You can even update your avatar on the go if felt necessary.

Both the apps are available for free at the moment. The Xbox Companion app, which is just 1MB in size, is available for download at Marketplace. Check it out here. Head here for the iOS app.

The company has also released a new video to go with the app. Check out the video below: