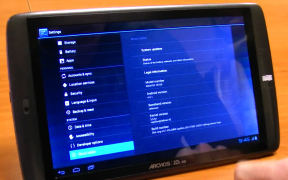 When it comes to high-end tablets Archos certainly isn’t the first name that pops into your head, regardless it is a well-known budget brand that still manages a fairly solid product at a lower price point.

When it comes to budget options, the primary OS of choice is often the smartphone-optimized Android 2.0 and not tablet-focused 3.0 Honeycomb.

As far as Android’s new ICS 4.0 OS, you can generally forget it on lower end models, but this time around it seems Archos OMAP4-based Archos G9 tablet line is setting their targets high with a launch of new models  in Q1 2012 that support Android 4.0.1.

Up until now the Archos G9 Tablets haven’t exactly been the hottest selling devices on the market. Can adding ICS to the G9 mix make any difference, or will other upcoming Ice Cream Sandwich-based tablets leave this in the dust?

We will know soon enough. Expect to see the G9 running ICS demonstrated further at the upcoming 2012 CES.