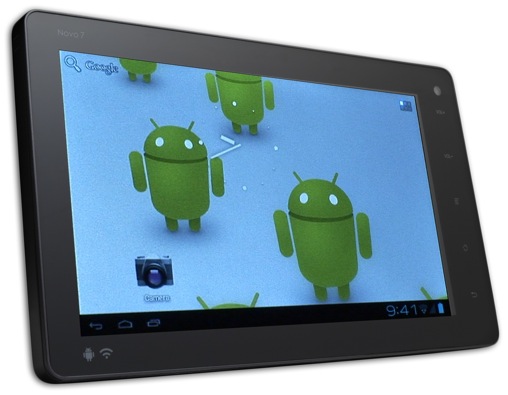 Are you looking for a tablet that runs Android’s new Ice Cream Sandwich OS, has a capacitive screen, and a price tag under $100? If you’ve been looking around for such a tablet, you’ve likely been told you need a reality check. Generally budget tablets run some variant of Android 2.0 and have horribly low quality resistive screens, at least until now.

The Ainol Novo7 is a new tablet that is actually a collaboration of efforts by such companies as Ingenic and MIPS, available for under $100. The downside is that for now it’s only available in China, though MIPS and Ingenic plan to expand its target base to other countries as well.

The Novo7 has a 7-inch capacitive screen and runs a 1GHz Single-core MIPS processor, while having enough battery power to last about eight hours while watching video, seven for web, and six for playing games. Did I mention it uses Android 4.0 as its operating system?

For such a low price point, its hard not to be impressed by its feature list. The Novo7 also contains front and back cameras, 3D graphics, 1080p video decoding, and even an HDMI port.

Generally a low-priced Chinese tablet wouldn’t be worth even considering, but this MIPS powered tablet has a certain appeal that is hard to deny. The device even has official Google certification which means that Google Maps, Gmail, Google Music, and even Google Talk are present on this tablet. The only downside is that Google’s Market isn’t available in China, though it certainly could be included on the tablet when it officially arrives in other markets outside of China.

Though the Novo7 is far from a power-house, it certainly is a fairly capable tablet for such a low price. MIPS is certainly the underdog in the tablet/phone market compared to ARM and even Intel (x86) processors, so its nice to see a low-price product that really shows off what it can do.

While I wouldn’t expect this tablet to reach the US or even European market anytime soon (at least not for several months), I think it could be a very big hit if and when it did. MIPS may not be the champion of mobile devices, but its hard to find a device that has so many features packed into such a low price.

For now, all we can do is wait and see. The technology in MIPS isn’t highly popular and Ainol isn’t exactly the most well know company, but the price certainly is hard to beat.