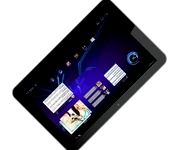 This mysterious Jaguar tablet has a ZiiLABS ZMS-20 processor as its beastly heart. It’s a unique 1.5 GHz dual core ARM Cortex A9 processor sporting 48  (or 96 for ZMS-40) stem cell type media coprocessors. Some technical details about prototype platform and earlier demos can be found at ZiiLABS.com site. Another great resource is the following blog page.

As it becomes fashionable these days, the last video from ZiiLABS shows Ice Cream Sandwich. They have made no comments regarding it beyond calling it “ICS Final”. This is usually a developer’s term designating an end of a sequence of Betas and Release Candidates.

It seems that in this case ZiiLABS engineers are very proud that their Ice Cream Sandwich port runs on their Jaguar model smoother and better than anything anybody has seen so far, Google Nexus S included.