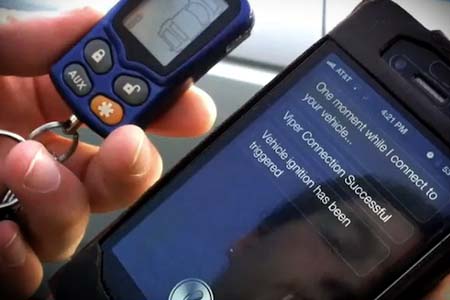 If you’ve ever wished that you could use SIRI to start you car, your wish has been granted. Brandon Fiquett, a developer and engineer, figured out a way to combine Viper’s SmartStart program with SIRI, which lets him start his Acura through his phone.

According to Fiquett, “The command is sent from Siri to a Viper server, then relayed via cellular connection to the car. The car then broadcasts an update via RF to the key chain remote. It can arm/disarm as well.”

The plug-in created to make this work interacts with a script that allows the user to send commands to any car registered through the Viper SmartStart System.

The hack makes it possible to lock the doors, open the trunk and even turn on the car alarms all through voice technology.

People who are technically proficient should be able to re-program their own iPhones to use voice to start their cars by following Fiquett’s directions. A good place to start is at Fiquett’s website.

Keep in mind that using the hack could cause a security lapse or even damage your phone, so use at your own risk.

Check out the video below to see SIRI in action: