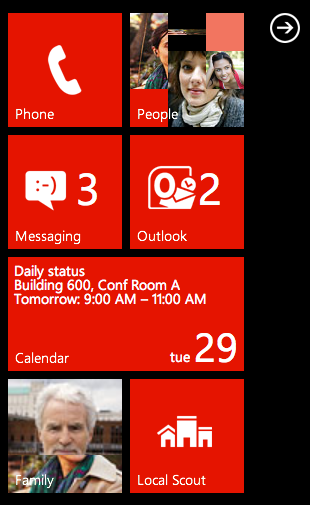 Windows Phone 7 is a vastly popular OS that everyone is just dying to get, right?

Okay, not really but that doesn’t stop Microsoft from attempting to sway smartphone users in their direction.

To be fair, Phone 7 really is not a bad OS from the limited use I’ve had with it.

If you’re curious about Phone 7 but really haven’t had the opportunity to test it out, you are in luck.

Microsoft has now released an HTML-5 based demo page that can be used right from your iPhone or Android phone that will give you the chance to test drive their mobile OS.

The browser-based Windows Phone 7 demo turns your smartphone browser into the Phone 7 homescreen and lets you try all the main features of WP7 including Phone, People, Messaging, Outlook, Family and more.

Tapping any of these tools will lead you through a semi-guided demo and allows you to scroll screens and flip pages along the way.

I personally tested it out on my Android-based phone and found the demo gave us a really nice look into what Phone 7 was all about. Does it make me want to throw away my Android phone right now in favor of WP7? No it certainly doesn’t, but when it comes time for an upgrade I will now at least consider WP7.

With Windows 8 adopting nearly the same interface as Phone 7, in the future I wouldn’t mind having the same ease-of-use and familiarity, regardless of whether I’m on my phone or PC. Will others that try the demo feel the same or will it turn them off more? Only time will tell for sure.