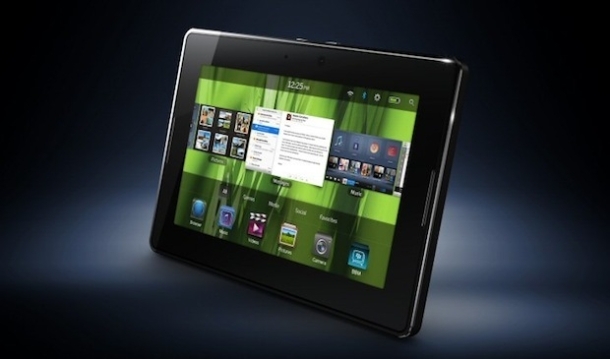 According to a post at Crackberry, the Blackberry Playbook has now been cracked…. errr, rooted, I wanted to say.

A team named Dingleberry (immature name, I know) made up of three mysterious guys nicknamed as xpvqs, neuralic, and cmwdotme have succeeded in gaining access and reverting some Blackberry OS system permissions. This allows the OS to be tweaked into doing some things it couldn’t before.

The first video shows the BB Playbook blinking with LEDs and dimming the backlight accomplished on remote from the host computer’s terminal. A bit better visual proof of the successful root is shown in video below:

This is all the evidence of the root for now, but you can try to follow the Dingleberry developments through all their tweets:

As of today, they also promise the release of their Dingleberry Tool soon, and an IRC channel to converse with a more technically inclined audience.

So far, the Black Friday and Cyber Monday sales of heavily discounted BB Playbooks were met with mixed success. There are also  some people at the Crackberry forum who are claiming that they are RIM’s employees and predict fire sales of BB Playbook 16 GB at the HP Touchpad price point: $99.

Refurbished units could be had at $150 – $170 these last couple of days. All these rumors and slashed price tags may lead to the situation that BB Playbook could become a good playground for various tinkerers. The majority of them these days are definitely Android hackers.

The BB Playbook’s reference design is quite similar, or is a direct ascendant of the platform used in the NOOK Tablet. The NOOK Tablet is just a blind (=no cameras) and disoriented (=no GPS) stepson of mighty BB Playbook with perfect HD vision.

Until now, there were no reports of compromising, or circumventing M-Shield’s stronghold imposed on bootloader or other critical parts of respective systems. Keep in mind however,  such a protection is a multi-layered business by definition, and some of its tiers might be not really protected against simple exploits. Nothing of these exploits ever touches the integrity of QNX microkernel itself though.

One of such rooting exploits was used to root the NOOK Tablet, a similar exploit helped in rooting Amazon Kindle Fire — another BB Playbook’s stepson, this time not only blind, but also deaf (no microphone) and with a loss of external memory compared to NOOK Tablet. Today, it is unclear whether these new “e-reader” tablets will be capable of running other than stock kernels, but as of now customizations based on them are moving on fast.

My take on it goes like this: If the Dingleberry Team or any of their followers will be successful, BB Playbook will run Android Market, Google Apps (like Google Mail, Google Voice, Google Talk, and whatever Google) via the BB OS Android App Player. In a sense, a similar sandbox approach, only quite narrower and straight-jacketed for users longing for a “native” email app, was already demoed by RIM engineers themselves who are developing their version of Android “compatibility” for the forthcoming BB OS 2.0 release.

This is to say, that as long as a Dalvik Virtual Machine (aka Android) could be sandboxed and running safely on the QNX-based BB Playbook, there’s nothing threatening the integrity of QNX core itself could be assumed from such a development, or from Dingleberry Team’s exploit for that matter.

Personnel of nuclear installations, at International Space Station, of major Internet routers and other QNX critical installations of “mission impossible” rank may again breathe freely: these types of ‘hacks’ won’t harm you.

If Android apps really can run well in a sand-boxed mode, then this BB Playbook for $99 (or even for $199) may become a very attractive Christmas gift if compared to those blind and deaf Kindle Fires and NOOK Tablets.