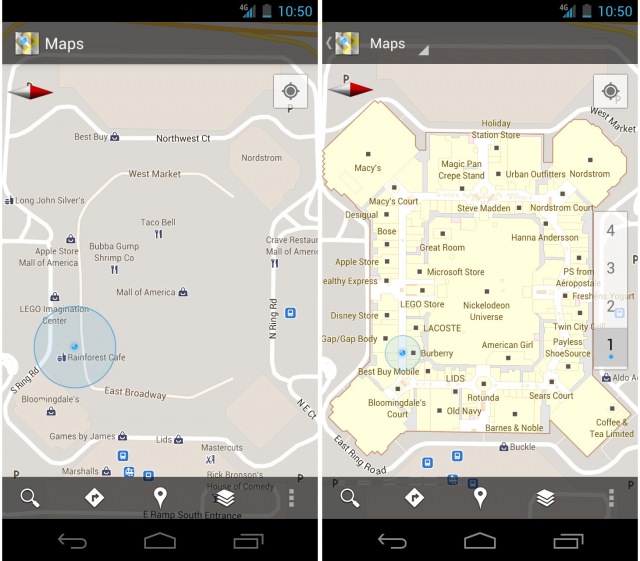 If you’ve ever been lost at the airport, Google has the solution to your problem. It seems that Google Maps is now getting an upgrade that includes vastly improved indoor maps. This means that major locations like some malls, airports, and even department stores will have a handy map that even shows where you are with the image of a “little blue dot”.

The app can be downloaded from the marketplace, right here.

The previous version of Maps did offer some indoor functionality before, but they were accompanied by a low level of detail and poor accuracy. Google has now optimized its technology for indoor venues and so accuracy and detail are now much improved. The maps will even detect what floor of a building you are on and adjust accordingly.

While certainly better than what Google offered for indoor maps before, it still is missing a few features that limit the device. Search doesn’t work indoors, meaning that you’ll have to scroll around the map to find a restroom or shoe department, you can’t just start typing to get there. Also there are no turn-by-turn directions, though in most situations such a feature really wouldn’t be necessary in the first place.

Another problem that Maps will likely face is reception, keeping in mind that GPS rarely works indoors and so the app will pramarily be taking advantage of either your cell phone data signals or local WIFI hotspots to get you the maps you need.

Today’s launch includes participation from many major airports and big-name retailers like IKEA and the Home Depot. Of course, Google can’t work directly with each and every indoor venue, so it’s also launching a self-serve tool that will allow store owners to upload floor plans and/or blueprints of their venues if they so choose. The tool also includes a feature that will help map GPS coordinates to the interior of the store.

If you are the type of person that gets lost in big indoor locations like malls, this app could certainly make life just a little bit easier for you.