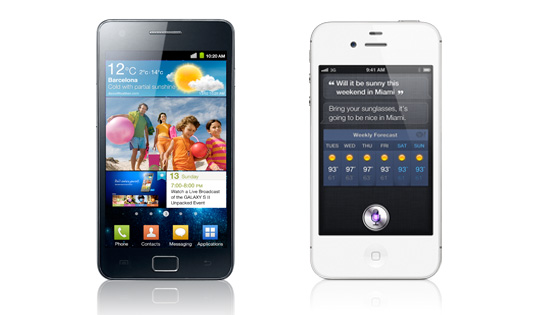 The declining relationship between Samsung and Apple is really starting to heat up a little. First, it seems likely that Apple is dropping Samsung in favor of Sharp for its next-gen displays. Now, Samsung has decided to create an ad poking fun of Apple’s iPhone 4G in favor of the Galaxy S II.

The only problem I see with the ad is that Apple can easily rebuke it with a parody of their own showing a similar line of cold kids waiting for Samsung Galaxy Nexus, so it’s a stick with two ends we look at here.

Honestly, the Samsung Galaxy Note might have made a bigger impact, setting it apart from the 4G with its massive screen and to better compare oranges to apples (or Apple?). There just isn’t enough to set the Galaxy S II apart from the iPhone, except 4G. Perhaps if Samsung was to do something bold like pick up the dying WebOS for their phones, they could really strike a major distinction from the competition.  In the ad, even the clothing of the Galaxy S II users and those waiting for the 4G were the same, showing little difference in the targeted group, of course this is likely the point. Samsung was probably trying to make it clear that even the “more artistic” types are willing to switch from an iPhone to a Samsung model.

If you can show me a major feature that the Samsung Galaxy S II can do (beyond 4G) that Apple can’t, then I will feel that the switch is worth it. For now, there just doesn’t seem enough of a pull to really attract the very loyal types of users that purchase Apple products.

Jokes aside, I don’t believe the ad might be capable of pulling people out of the long lines standing to get their iPhone 4S, or the upcoming iPhone 5. Despite Samsung’s attempts in the ad to make an appeal to Apple fans, the truth is that Samsung just doesn’t appeal to the same type of user. No amount of ads are likely to change this and Samsung might want to learn how to live with it, and not just in San Francisco, but in Germany, or in Australia, or anywhere in the globe really.

As for my personal take on the situation? Instead of spending hundreds of that super-featured Android or iOS phone, why not take a look at My LG Optimus S which costs only $99 with no contract at all.

Check  out the ad for yourself, below: