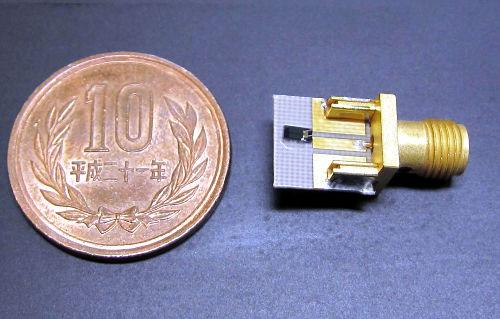 How does a 3o Gbps wireless connection sound to you? Soon your wish might just come true.

Japanese electronic parts maker, Rohm, announced yesterday that it has developed a tunnel effect diode capable of working at a mind boggling frequency of 300 GHz which translates to a wireless data transmission speed of 1.5 Gigabits per second in experiments. The diode may hit a “TeraHertz” band of 100…10,000 GHz where transmission speeds of even up to 30 Gbps will be possible.

The device is a combo of a diode itself and its less than 1 cm long antenna. Despite its small size, it can accommodate many working wavelengths.

The best part is that the technology will be quite cheap when it hits mass production in 3-4 years. The potential uses for this technology include 4K HD TV circuits, and could also be very handy in equipment that presently is serviced by fiber optics contraptions and cables.

While achieving 30Gbps over a wireless signal sounds rather sci-fi at the moment, it is clear that breakthroughs like this will push transmission speeds to levels we can only dream about today.