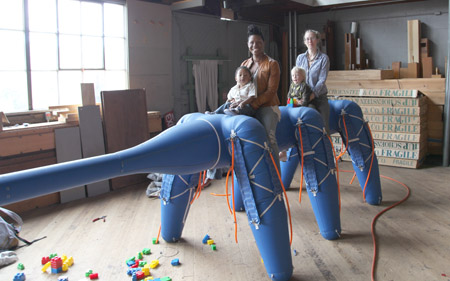 Have you ever dreamed of riding on a giant inflatable robot that looks something like a Frankenstein inspired combination of Ant and Roach? If you have had such a dream, you might want to seek some therapy. Even though the concept sounds a little out of this world, the robot is a project designed by Otherlab, which is also working on a pneumatic arm and hand.

The robot is called the Ant-Roach thanks to it’s somewhat anteater snout and its cockroach like design. The Ant-Roach is completely inflatable, including its muscle structure. The robot weighs only seventy pounds and is easy to carry around, but due to its design it can support up to 1,000 pounds. You certainly have to admit the idea is pretty awesome.

The Ant-Roach uses four independently controllable pneumatic bags that are designed to contract when inflated. Movement is achieved by a sequence of inflating and deflating which allows walking, turning, and even swimming.

So why does Otherlab focus on inflatable robots? For starters they are cheap, easy to build, and easy to fix. The biggest reason is that they are more complaint than their metallic brethren like the Omni-Crawler and much safer for operation around humans thanks to their air-filled structure.

The idea behind the Ant-Roach is certainly unique, but you have to wonder what conventional purpose it might serve beyond showcasing the technology or maybe as some kind of parade float. While Ant-Roach might just be a cool showcase item, the concept of inflatable robots certainly could have merit in the future.

Below is a video of the Ant-Roach in action: