After decades of electric cars being avoided by manufacturers, it seems that recently electric cars are really starting to go somewhere (pardon the awful pun). A combination of improving electric batteries and increasing gas prices have likely lead to this change. Competition is fierce in the automotive industry, Nissan and Ford are both offering vehicles that use electric batteries. And now Honda looks to be joining the electric party with its 2013 Honda Fit EV. The all electric Honda hatchback runs on a 20-kilowatt-hour li-ion battery and high-density 92-kilowatt coaxial electric motor. The coaxial electric motor is actually derived from the motor in the Honda FCX Clarity fuel-cell vehicle. Onboard a 6.6-kilowatt 32-amp charger allows for convenient recharging. When paired with a 240-volt charging port, the Fit EV can fully recharge in as little as three hours. A full charge can travel about 123 miles, which is higher than both the Nissan Leaf and Ford’s all-electric Focus. 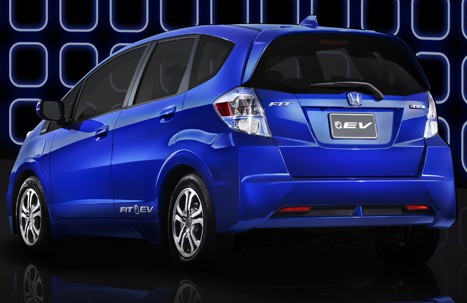 The Fit EV will start rolling out in the summer of 2012 to a limited market in California and Oregon, and will spread out to at least six undisclosed East Coast markets in early 2013. The lease payment will target $399 a month for three years and is based on a $36,625 price point.

The downside to the Honda of course is that they are only targeting 1,100 units over the first three years of production. Also keep in mind that with the Honda Clarity only 50 cars have actually made their way into the hands of leasees even though there was an initial queue of over 80,000 interested customers.

Vehicles aren’t the gas-guzzling machines they used to be as hybrid and even all-electric methods are becoming more commonplace than ever before.

Overall, the Fit looks like another interesting electric option. Is the electric car the wave of the future or just a temporary trend that will be replaced by another emerging technology? Only time will tell for sure.