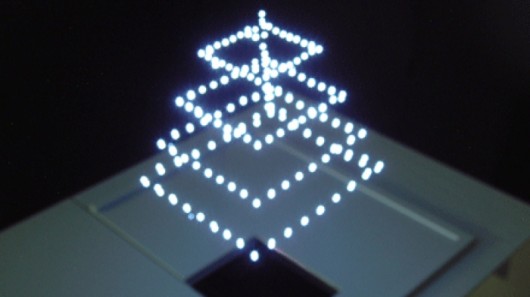 It seems that every day a new technology rolls out that makes movies like Star Wars and Star Trek seem less like science-fiction and more like science fact. Engineers from the Japanese company, Burton Inc, have now created a “True 3D” plasma display technology. The technology evolved from work that started five years previously by teams at Keio University and Japan’s national institute of Advanced Industrial Science and Technology.

3D has recently become the next big thing, but what Burton is attempting to do really takes the technology to a new level. While most 3D displays today use a form of optical illusion by projecting 3D images onto 2D screens, the True 3D technology is no optical illusion.

The Burton technology functions by focusing laser light into points which stimulate oxygen and nitrogen molecules in the air to a plasma excitation level. Computer control of the laser’s position can cause the dots to create recognizable patterns that are very similar to a hologram and suspended literally in thin air.

According to the company the system can created about 50,000 dots per second with a frame rate of 10-15fps, although the company is working hard to improve the frame rate to 24-30fps.

The unique technology is far off from acting as a Jetsons-style hologram TV show, but for purposes like digital signage and 3D analysis it seems like a match made in heaven.

Technologies like these have a long way to go before they are practical and affordable for everyday use, but I have to admit the video footage of this technology looks pretty cool. Now that thanks to Burton we have hologram devices, I’ll I need is some company to get to work on a Death Star and then I will really be set.