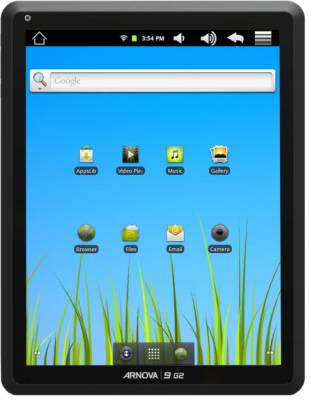 Archos certainly isn’t the leader of the Android tablet sector, but they do have quite a few decent budget options for those of us that want a tablet but just can’t afford the iPad or higher-end Android devices.

Now here comes yet another addition to its Arnova line of tablets. The newest member to the gang is the Arnova 9 G2, featuring a 9.7-inch 1024×768 pixel IPS display. The tablet also features a 5-point multi-touch capacitive touch panel, a 1GHz ARM Cortex-A8 Single Core Processor, has a front-facing camera, stereo speakers, a built-in mic, and runs Google Android 2.3 Gingerbread.

The amount of storage memory in the Arnova 9 G2 is only a measly 8GB, but luckily the device is armed with a microSD card slot, USB, microUSB, and WIFI for expanding your storage options through memory cards and online cloud storage.

The tablet is just a little smaller than a first generation iPad, and weighs just 1.4 pounds. Archos also offers tablet configurations with 7, 8, and 10.1-inch displays as part of its G2 lineup. Although pricing has yet to be revealed, most of the Archos tablets are found at a price point that is under $300, with many going below $200.

With a single core processor, Gingerbread instead of Honeycomb, and lack of internal storage this is certainly not an iPad killer. For those of us that need the best, this isn’t the tablet for you. What if you are looking for a secondary tablet, a budget tablet, or something to give your kids for Christmas? If this sounds like you, than the Archos could be a decent solution. The quality of this brand of tablets is no where near larger name brands but it does fare well enough against other budget options such as Coby.