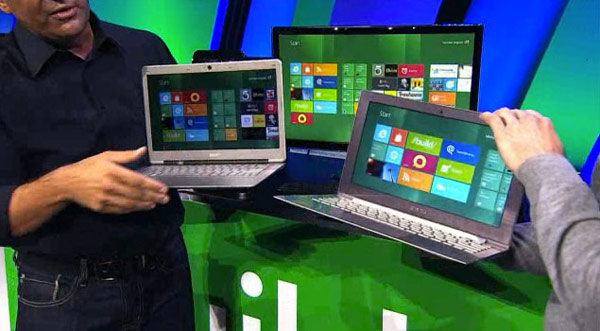 We already know that Windows 8 is going to be a platform that is simultaneously geared toward both tablets and regular PCs, but it has now been confirmed by Intel that you’ll effectively being able to get both in one package with touchscreen-enabled Windows 8 ultrabooks.

This confirmation comes by way of Intel CEO Paul Otellini. Ultrabooks are barely out of the gate with their sleek and slim profiles, but adding touchscreen capabilities would also add cost to an already premium product. Ortellini says that they need to “get touch to a lower cost. This is particularly important, as we move to the launch of Windows 8. The iPad and the iPhone have made touch a paradigm.”

He wants to see the touch-based ultrabooks down to the $699 level. “Starting with Windows 8, you have a mainstream operating system incorporating touch. Our view is that in the ultrabook lines, touch is a pretty critical enabler. When users see that new Windows interface, they’re going to want to touch it. If the screen does nothing, you have disappointed [the] consumer.”

This makes sense. To this day, my favorite Android tablet is still the Asus Eee Pad Transformer and a big part of that has to do with the keyboard dock. I get a laptop-like experience, but I still get the touchscreen of a tablet. Here, you get a real Windows machine too, but I have a feeling that $699 still isn’t cheap enough. Starter laptops can be had at $299 and the Eee Pad Transformer with dock can be had for $499.