Earlier this year we had a look at the decidedly diminuitive AAXA P1 Jr. pico projector. That thing was really tiny, but it only pumped out ten lumens of brightness. That might be good enough for some circumstances, but there are other situations where you want more brightness without having to lug around a full-size projector. 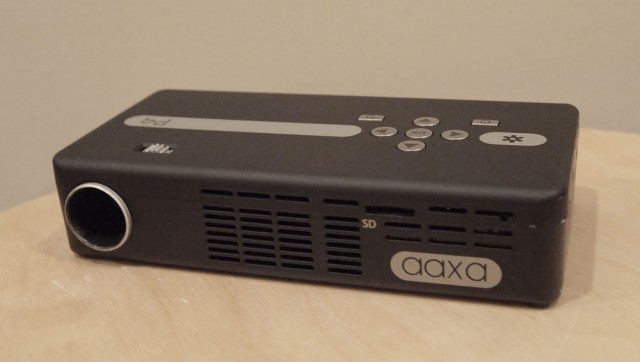 The AAXA P4 is being touted as the world’s brightest battery-powered pico projector. There may be brighter, but they need external power sources. In the case of the P4, you get an impressive 80 lumen LED light engine to go along with that DLP projector. This gives you up to an 80-inch image, which is easily big enough for most boardrooms.

You get “vibrant color technology” with 15,000 LEDs, as well as the 75+ minute battery, integrated media player, and Windows CE Embedded. That last point is particularly important, because it means that you can run PowerPoint presentations and use other Windows CE apps without having to connect to a separate computer. The 2GB of internal memory is useful in that regard too, but there is a microSD slot in the front, as well as both a USB and micro-USB port in the back. Naturally, this pico projector will take external inputs too, including VGA and composite (via the provided adapters).

Opening up the box, you find just about everything that you need to get started. There’s the pico projector itself, of course, as well as a wireless remote, mini-tripod, composite adapter cable, VGA adapter cable, and mini-USB to USB adapter cable. Not shown is the power cable, but that’s included too.

Optionally, you can add the Rii mini Bluetooth keyboard, which certainly comes in handy when you are navigating your way through Windows CE Embedded. Indeed, some form of wired or wireless keyboard (and mouse) becomes necessary if you want to dig into the true Windows environment of this pocket-sized device.

Is It Really That Bright?

In short, yes. The most common complaint about pico projectors is that they are not powerful enough for everyday use. While this certainly won’t hold a candle up to many of the full-sized projectors out there, it more than easily handles itself even in less than ideal conditions. The colors are reasonably saturated, the contrast is quite good, and the brightness allows you to project videos, slideshows, and presentations in rooms where there is still some ambient light.

You can see a brief demo in this YouTube video I shot in a restaurant. It was the middle of the day and the restaurant was reasonably well-lit, but the image still came through clear. Yes, it does appear to be a little washed out, but that’s to be expected and even full-size projectors would have that kind of effect in that kind of environment.

It is possible to go brighter with something like the AAXA M2 Micro Projector, but that is not as small and it requires an external power source. The sheer versatility and portability of the P4, coupled with its higher level of performance, make it a valuable tool for executives on the go.

The home menu on the P4 consists of six icons: video, picture, music, source, setup, and desktop. These are easily navigated using the controls on the projector itself or via the provided IR remote. The desktop is how you get full access to Windows CE; getting back to this home menu is a shortcut on the Windows desktop.

This is all very easy to understand and I found the interface to be reasonably responsive. Switching to the different sources — if you wanted to connect a game console, DVD player, or notebook PC for instance — is also easy enough. The interface for playing actual media files felt a little sluggish at times, though, but getting through the menus was fine. 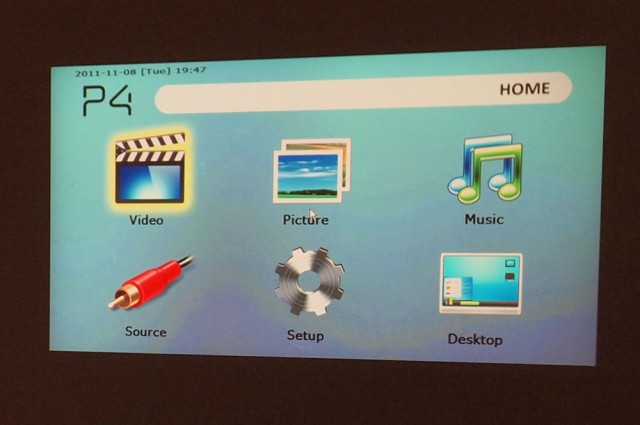 One level deeper within video, picture or music from the main menu, you’ll find the ability to choose the source of your files. This includes the internal memory, the microSD slot, and the USB port. Putting files on the internal memory is done with a microUSB cable and the P4 will appear as an external drive on your computer.

Theoretically, you should be able to access the files on a USB drive, but I had trouble with this and it did not appear to work for me. I followed the instructions in the user guide and created the specified folders, but that didn’t work either. My hope is that this is either an early production unit or there is a firmware update that can rectify this, as having on-the-fly USB media access is huge for a portable device like this.

The on-board fan can be noisier than I would have liked. The one-watt speaker is quieter than I would have liked. Even so, I can’t help but to love this little AAXA P4 pico projector. The portable package is convenient and the 75+ minute battery should be able to last you though most presentations. It would be nice if you could charge via USB, rather than being forced to use the regular wall plug though.

It’s not the cheapest thing in the world with an MSRP of $399 (currently on sale for $339), but it’s not terribly expensive either. The Windows CE environment is versatile, the various inputs give you flexibility, and the built-in media player is a definite bonus. The 80 lumen LED light engine doesn’t hurt either.