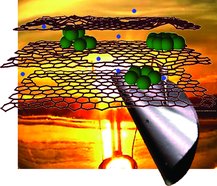 I love my Android phone, but I don’t love its relatively short battery life. Mobile technology has come a long way in the last few years, unfortunately battery technology isn’t keeping up at this same pace. Researchers at Northwestern University claim to have made a recent breakthrough in li-ion technology that could finally help batteries catch up. The new technology allegedly holds ten times more energy than today’s li-ion batteries and additionally charges roughly ten times quicker.

Inside Li-ion there are innumerable layers of graphene, a one-atom-thick sheet of carbon atoms. Lithium ions fill the spaces between these layers and when the bettery is being charged the atoms make their way to the edge of the sheet in order to get down to the next layer and make room for more ions. The speed of recharging is limited by how quickly these ions can get from layer to layer.

Professor Harold Kung at NU has discovered two techniques for improving this charge process. His lab decided to combine the strengths of carb and silicon by populating the area between the graphene sheets with silicon nanoclusters. These clusters greatly increase the amount of ions that can reside in the battery. The end result is a charge capacity that is greatly improved.

Kung’s lab took it one step further by perforating the graphene sheets which allowed the ions to take shortcuts to get to the next layer, this resulted in the major increase in charging speed.

As with many technologies there is a downside, and with the new battery technology it could possibly degrade quickly. After about 150 charges and discharges the batteries only showed a 5x improvement to capacity and charge speed over current li-ion batteries.

According to the researchers behind the new techniques, this form of li-ion battery could reach the market in about three to five years. Although this means I will forever be doomed to suffer from bad battery life with my current phone, perhaps in the next few years this will all change for the better. Keep in mind though that technology breakthroughs are made every day by universities and research centers, and many of these never see commercial reaches. For now I will keep my fingers crossed and hope, because we could all use better battery life in our favorite mobile devices.