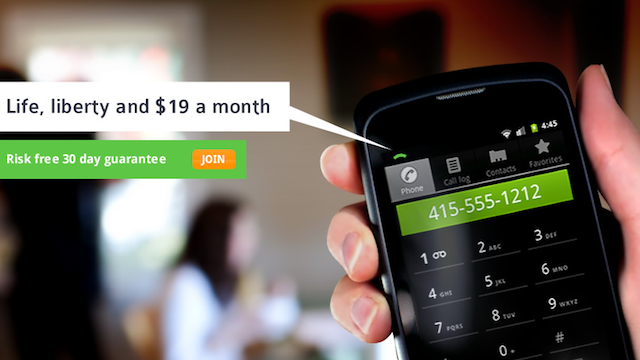 Tired of paying $50, $60, $100 or more to get some decent cell phone service? It looks like a real deal is being offered by new wireless carrier Republic Wireless, because they’ve got a $19 per month plan that gives you unlimited talk, text, and data. Yes, unlimited data too.

This crazy plan is now live and it does not appear to be a promotional price to lock you into their fold. That $19 price point sticks with you for however long you stick with Republic Wireless. If it sounds too good to be true, well, you have to understand a couple of catches.

First, you’re not really allowed to bring your own phone. Instead, you have to use a special phone with special hardware geared specifically toward Republic Wireless. For now, the only handset available is the LG Optimus with Android 2.3 ($199 outright, $99 with coupon code “welcome19”), but they’ll surely add more in the future.

The service is designed so that you use Wi-Fi for most of your needs and it only falls back onto 3G (Republic uses the Sprint network) as necessary. This includes both data requirements, as well as voice. This “hybrid technology” is not unlike the UMA service from T-Mobile. Texts can be sent over Wi-Fi too.

The other catch? While the plan is “unlimited” in name, there are some soft caps. If your Cellular Usage Index (CUI) is too high, meaning you do too much on 3G (and not enough on Wi-Fi), Republic Wireless will show you the door. The “soft caps” appear to be set at 550 minutes, 150 texts, and 300MB of data. Remember that these are only over 3G and you can be as unlimited as you want over Wi-Fi.

Oh, and in case you’re curious, Republic Wireless is a venture by Bandwidth.com, which also happens to be the parent company of such companies as Skype, LivingSocial, and Pandora. So, yes, they know what they’re doing when it comes to consumer-geared online services.