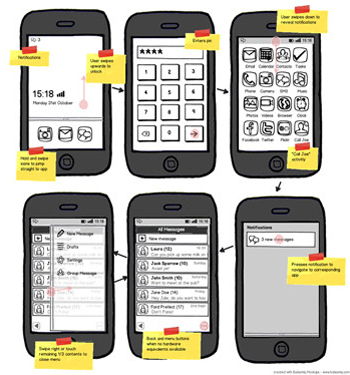 The new OS is currently under development as the Mozilla team is working on its “proprietary, single-vendor stacks.” Various APIs for the camera, phone, SMS, and so on are also be developed. The idea here is to have a truly stripped down OS for contacts and phone, and getting everything else through the web.

You’ll notice that early drawings depict an icon-based OS, which will largely fall in line with people already familiar with iOS, Android, and even webOS. We also hear that Boot 2 Gecko will use Android for booting and drivers, but HTML5 for most other functions. In any case, I’m not sure we need yet another OS option. We’ve already seen the slow death of webOS, the diminishing market share of BB, the less than optimistic outlook for QNX/BBX. Even WP7.5 is having a tough time.

In any case, I’m sure the legal types in Cupertino are already readying their papers for another patent infringement suit. I can feel it in my bones.