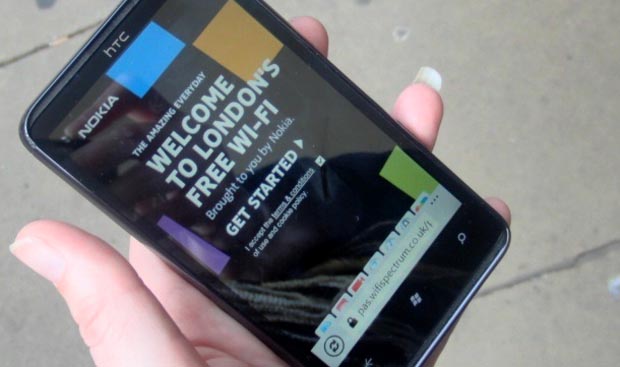 Good show, old chap. In talking with several friends who aren’t as enthusiastic about tech as I am, I get the impression that most people “haven’t heard anything” from Nokia in years. The relative market share around these parts speaks to that too, so I guess Nokia wants to get the regular folk excited about their brand again. And they want us to know they’re being fresh and new with Microsoft.

So, to help spread the word about Windows Phone 7 (and WP7.5 Mango), Nokia is planning to launch 26 Wi-Fi hotspots spread out around London. These free hotspots will utilize existing telephone boxes, connecting them to 20Mbps DSL lines. That said, speed will be capped at 1Mbps downstream and 500kbps upstream. Naturally, connecting to these WiFi access points will lead you to a promotional splash page like the one shown above.

This is a similar strategy as that employed by Google in airports a couple years ago, building the brand awareness with free WiFi for the random populace. This gives Nokia a way into the heads of consumers to promote the Lumia 800 and Lumia 710, since they may not be able to get their attention otherwise. It also helps that they can collect some data about the people who use these hotspots, since that’ll surely be a part of the T&C agreement.

If these are still around when the 2012 London Olympics take place, I imagine they’ll get quite a bit of attention (and data).