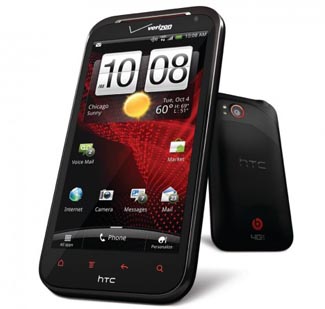 You know, Verizon Wireless has been pretty good with the Google Android thing and that trend is continuing with the upcoming launch of the HTC Rezound. Set for release on November 14, this phone follows on the success of devices like the Droid Incredible and it packs a few extra surprises to set it apart from the pack.

Maybe you don’t want the Motorola Droid RAZR. That’s fine, because the Rezound packs a wallop. For starters, it’s one of the few phones that uses HTC’s Beats Audio technology. What’s more, it rocks out with support for Verizon’s 4G LTE network and gets more than enough juice by way of the 1.5GHz dual core processor.

The 4.3-inch touchscreen display may look like its par for the superphone course, but you get a 1280×720 pixel HD resolution on here. That’s the same as the Nexus Galaxy. While it ships with Android 2.3 Gingerbread, the Rezound will be getting a tasty upgrade to Ice Cream Sandwich in “early” 2012. Rounding out the specs are the 1GB of RAM, bundled Beats headphones, 16GB internal memory, GPS/aGPS, and Bluetooth 3.0. Expect to pay $299.99 on a two-year agreement.