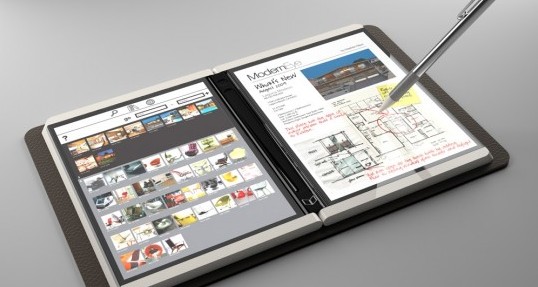 Microsoft never had any real place in the tablet PC market. The project Microsoft Courier project was their greatest hope, and even that was canceled for some strange reason. From the very beginning it was not clear if the Courier was ever going to reach a real life product, because it is one of many Microsoft’s working prototypes that never end up going anywhere. But everyone’s response to the Courier should have drove them to making that thing a reality.

The Courier looked like it could have revolutionized the personal device market for businesses and students. Although details were scarce, all we knew about the tablet was that it would’ve had two color screens, a built-in camera, wireless internet and a sick UI (at least in the demo video). Users would have used a stylus for writing and drawing, but it could have also operate through touch.

Courier was “almost the total opposite of what everyone expected from an Apple tablet.” It could have been an expanded iPod Touch with camera, multitouch display, microphone, wireless internet and 3G capacity.

Microsoft spokesperson commented on the decision by saying: “At any given time, we’re looking at new ideas, investigating, testing and incubating them. It’s in our DNA to develop new form factors and natural user interfaces to foster productivity and creativity. The Courier project is an example of this type of effort. It will be evaluated for use in future offerings, but we have no plans to build such a device at this time.”

The real problem with the Courier though was “It was running a modified version of Windows.”