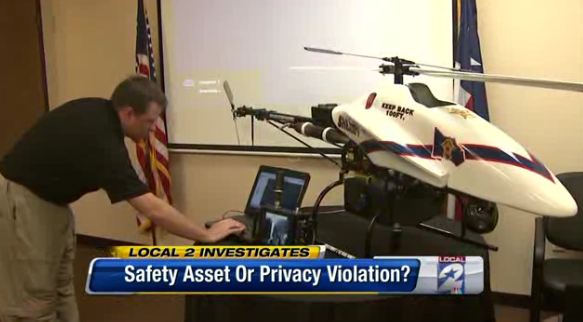 I really like R/C helicopters from a hobbyist’s perspective, but you can see how useful they’d be for more practical purposes too. Drones are used all the time in a military context and now one sheriff’s office in Texas is getting its own drone copter, complete with the ability to get weaponized.

The Shadowhawk helicopter has been acquired by the Sheriff’s office in Montgomery County in Texas. They say that it is being used as a safety asset, equipped with a remote video camera, infrared heat-seeking, and onboard GPS. It can be used to monitor situations where a human presence might not be the best idea.

The 50-pound UAV is built by Vanguard Defense Industries and while it is capable of carrying weapons, the Sheriff says that they have no plans to equip it with pellet guns, bean bags, or frickin’ tasers. Instead, the application is more toward tracking down criminals or assisting SWAT teams. What do you think of the concerns in relation to Big Brother-esque ramifications?

Check out the local news coverage for a video.