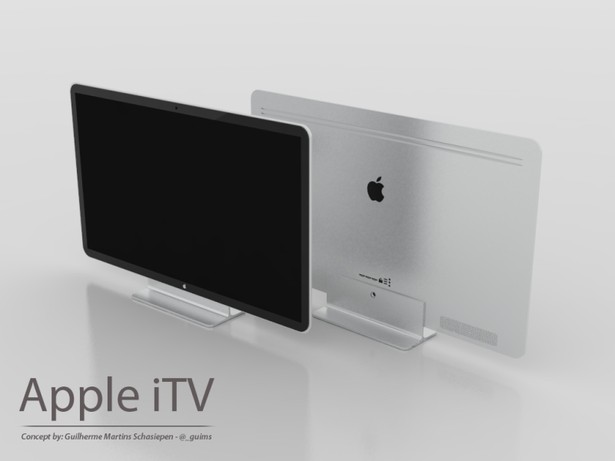 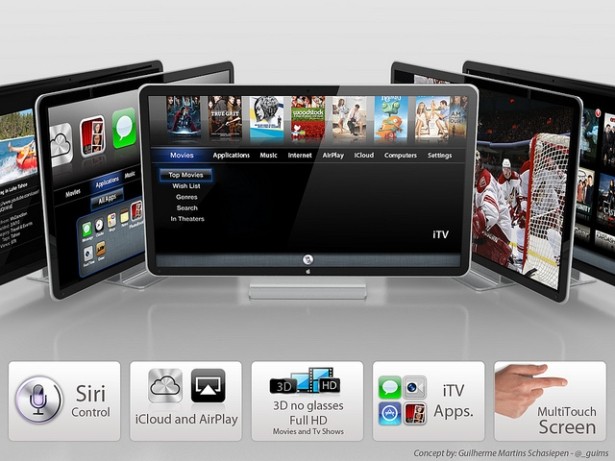 Recently, information came to light about the possibility of an Apple-branded Television set. This news came about from comments Jobs left to Walter Isaacson, the writer of the recently pubihsed biography about the former Apple CEO. In the bio, Jobs spoke of future plans for such a TV set that would possibly integrate Siri, iCloud, and more to provide a high-end multimedia experience from a wonderfully capable HDTV. Many speculations have led to it having all the technologies of an integrated Apple TV entertainment device, and more.

The news of the device has sparked the imaginations of many, including Guilherme M. Schasiepen who has created a fantastic concept design for what he believes an Apple Television should look like. The concept is named the “iTV” and features a super-thin, minimalistic styling that is decisively Apple-esque. According to the concept the device would offer abilities such as Siri Voice Control, multi-touch, FaceTime HD, AirPlay, and no-glasses 3D technology.

According to Scahsiepen, the concept would come in 32, 42, or 50 inch models with at least 1TB of internal storage. As a design concept, I honestly think it is very beautiful and could certainly look a lot like what Apple might truly design. As far as the ‘capabilities’, however, this concept is probably shooting a little too high with 1-2TB of memory and no-glasses 3D; although Apple is very good at creating cutting edge products that redefine expectations, so we really can’t be sure.

What we do know is that if such a product surfaces, Siri is likely to be part of the package. What you have to wonder though is wouldn’t it be more cost effective to just make a more powerful Apple TV Entertainment device that offered Siri, internal storage, and even possibly PVR functions? If such an Apple TV device existed I would certainly consider purchasing it, but a $2000+ priced Apple Television set? For now we will just have to wait and see.