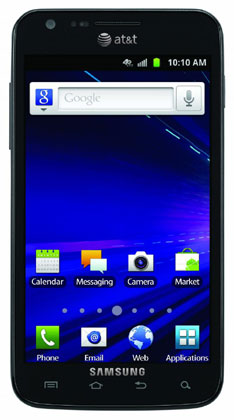 I thought the vanilla version of the Samsung Galaxy S II was already pretty incredible, but it looks like things just got a little faster and a little bigger. Improving on the original SGS2 is the upgraded Samsung Galaxy S II Skyrocket, an Android smartphone bound for AT&T’s recently expanded LTE network.

The addition of LTE is likely the biggest upgrade that you’ll notice on the slightly altered version of the SGS2. Beyond the compatibility with AT&T’s LTE network, the Samsung Galaxy S II Skyrocket also comes with an upgraded processor. The original 1.2GHz dual-core Exynos was already impressive, but this phone gets a 1.5GHz dual-core processor instead. The screen has also grown to a 4.5-inch (800×480) Super AMOLED Plus display.

Many of the other standard features make their encore appearance, including the great 8MP rear camera, 2MP front camera, and 16GB of internal storage. There’s the microSD slot and it’ll ship with the newer Android 2.3.5 Gingerbread operating system. Sign up for a two-year prison term LTE service agreement with AT&T and you can get the Skyrocket for $249.