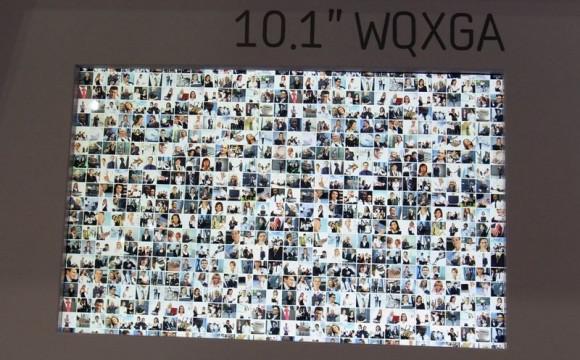 It seems that 2011 is the year for change when it comes to smartphone and tablet video resolutions. Just a little over a week ago, Toshiba slammed us with a 6” inch demo retina screen running an eye popping resolution of 2560×1600. Although it showed impressive visuals, it also left many of us a little confused, as 6” is typically too small for a tablet — unless you’re RIM — and too big for a smartphone — unless you’re Dell — so what exactly had Toshiba been thinking?

Luckily, Toshiba isn’t the only company looking to the future when it comes to high-end HD resolutions. Back in May, Samsung actually showed off a 10.1” prototype screen technology that also ran at a resolution of 2560×1600, yet this time they are back at it again with even more improvements. This week at the FPD International 2011 Conference, they showed off a new WQXGA 10.1-inch display that also is targeting a resolution of 2560×1600. The big difference for this display, however, is that it uses IGZO TFT utilizing oxide semiconductors; in english, it makes for a much more colorful, vivid and bright experience. As of now Samsung has yet to announce a specific product that will utilize this impressive WQXGA display but I can fairly confidently say it’s unlikely you will see the display in commercial product anytime soon.

I like these true HD resolutions reaching tablets and smartphones, it just looks damn nice. It’s also very likely that Samsung and Toshiba are the first of many companies focusing on projects that go above the current maximum tablet display of 1280×800.  In fact, we may even speculate to say that the iPad 3, with a suspected resolution of 2048×1536 could sport this Samsung panel.