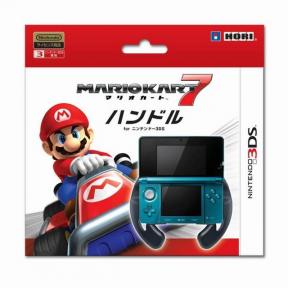 Nintendo’s Mario Kart 7 will be rolled out in December, but another video accessory maker is grabbing the limelight. Hori has just recently announced that it will be releasing a 3DS compatible steering wheel which is officially licensed by the big N. Amazon’s Japanese Site Andriasang has already listed the details without the photos but reports have it that the device will have a big L and R buttons to provide gamers with better control. A few press shots of the unit make the steering wheel look like a combination of the iPhone Helix grip and Wii Wheel of Nintendo. What do you think? Hori also stated that the steering wheel will be sold at the time when Mario Kart is released in the market. Hori steering wheel will be out in Japan and there is no news yet about it being released overseas. The device is pegged at $17 (¥1,280).