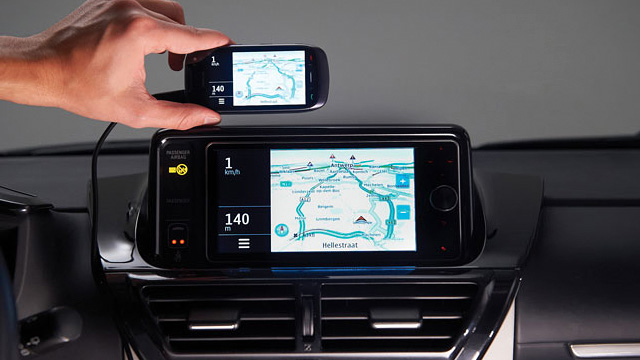 We use our smartphones for just about everything these days, from music listening to GPS navigating, but it’s not exactly appropriate to hold your phone between your fingers on the steering wheel. And that’s where the MirrorLink protocol comes into the picture (no pun intended).

One of the first to implement this tech is Toyota, which plans on using this in its iQ subcompact later this year. Basically, MirrorLink by the Car Connectivity Consortium takes your smartphone and mirrors its display on the car’s larger display. This isn’t just a straight blow up, though, as there are some car-centric optimizations in place.

The car’s infotainment system can be largely powered by your smartphone, providing it with the tunes and such. You can also make and receive phone calls, and the 7-inch screen on the iQ will be optimized for this purpose while still mostly mirroring what you see on your phone. The same can be said about the GPS navigation for your turn-by-turn directions.

In the instance of Nokia phones with Symbian Belle, there is the Nokia Car Mode app that connects to the Touch Life system. The simplified version of the phone’s UI runs while the car is motion, making it more convenient for the driver to interact with it. A fuller UI is available when the car is stationary. In the case of the iPhone, there’s the Application Launcher app that does a similar thing.

Carmakers could develop their own UIs, but why re-invent the wheel, right?