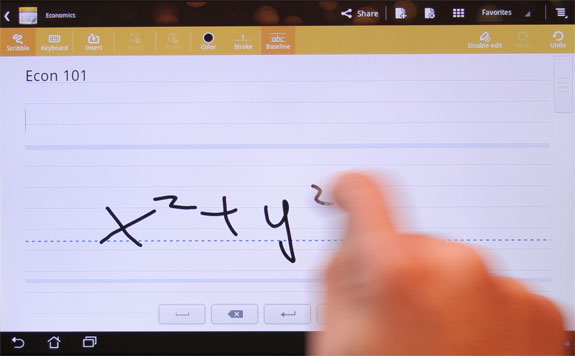 Now I have another reason to make me want go back to school, and that is Supernote. Supernote is an app that helps you take…notes, but in a super way. It had previously been shown on the Eee Pad Transformer and Slider earlier this month, when ASUS brought out the OTA update to Android 3.2.1, but now there are more details on new features within Supernote and they sound really nice.

Students will be able to write or scribble (doesn’t anyone doodle in class anymore?) using the keyboard or their own fingers and the Supernote app will go ahead and convert each hand-drawn item into an image, thus, allowing users to modify or delete their own characters. You can also insert graphs and charts when you’re in math class, resize the image and drag it around and you can also insert those diagrams into your lecture notes.

Supernote will even let you take the lazy way out of class (yes!) and let you snap a picture of whatever your teacher is scribbling on the blackboard and then you can insert those pictures into your notes, thus, letting you worry about it later or perhaps never.