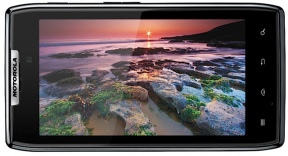 It was pretty exciting to see the announcement of the Motorola Droid RAZR yesterday, but that excitement only lasted a few hours. That very same day, it got trumped by the official unveiling of the Galaxy Nexus and Ice Cream Sandwich. Does this mean you should cast the new RAZR aside? No, not necessarily.

As it turns out, the soon-to-be released Motorola Droid RAZR isn’t going to be stuck in Gingerbread territory for the rest of its life. Android 4.0 Ice Cream Sandwich is reportedly being ported over to the device and it’ll be available as an update some time in Q1 2012. That’s really not that far away, considering that the RAZR itself won’t be launching until November anyhow.

Does this mean you’ll have some redundant hardware buttons? Yes. The Droid RAZR still has the four touch-sensitive “buttons” on the lower part of the phone and Ice Cream Sandwich uses “soft” keys on the touchscreen instead. I’m wondering if there is something in the options that would fix that, giving back some screen real estate and re-instating the use of the separate touch buttons.

The transition will take some time, as Motorola wants to make sure that features like Motocast and Smart Actions are suitably ported over to the Ice Cream Sandwich platform.